Katelyn Ohashi Pleads For Student-Athlete Compensation: "I Was Handcuffed by the NCAA Rules" 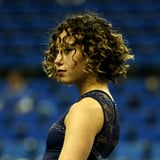 Katelyn Ohashi made her mark on the gymnastics world during her senior year at UCLA, but the now-22-year-old athlete wishes she'd had more opportunities to capitalize on her success. She made her case against the NCAA in a compelling New York Times opinion video published Wednesday, which highlights her viral collegiate career and the compensation she wishes she'd earned for her efforts.

In the video, Katelyn explains that she felt "handcuffed" to the NCAA rules, which prevented her from benefiting off of her own name and likeness, even though she wasn't joining a league after graduation. "The NCAA is a billion-dollar industry built on the backs of college athletes," she said. "How different would things be for me had I been able to use my image and name my last year of school in order to promote the things I want to further my future? I want to make sure the next person doesn't have to wonder."

Watch the full video above to see Katelyn champion for California's Fair Pay to Play Act, which would allow students to profit from their using their own image and likeness.