4 Moms Won Gold at Track and Field Worlds, and "Badass" Doesn't Even Begin to Cover It 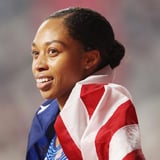 It was the Year of the Mother at the IAAF World Championships for track and field. Allyson Felix made headlines when she took gold in the mixed-gender 4x400-meter relay, a medal that pushed her past Usain Bolt to become winningest track athlete at the World Championships, ever. (She has 13 medals in all!) And that was a mere 10 months after giving birth to her daughter, Camryn, via emergency C-section.

Allyson was far from the only mom achieving greatness on the world stage. Jamaica's dominant Shelly-Ann Fraser-Pryce took home two world titles in the 100-meter sprint and the 4x100-meter relay. American Nia Ali upset a stacked field to win the 100-meter hurdles. And taking gold in the 20-kilometer race walk was Chinese athlete and mom Liu Hong.

Ahead, we've got all you need to know about each of these incredible wins, because not only did these women have a kid (or two!) and come back to become world champions - a few of them made history along the way.

The most effective retinol is hiding at the drugstore, and it only costs $10

How To Make the Ultimate Healthy Pumpkin Spice Latte