Simone Biles Starts Off Worlds With a New Floor Skill Named After Her - Are You Even Surprised? 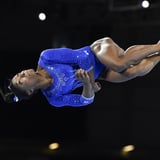 Simone Biles makin' more gymnastics history as she debuts the triple double at World Championships. Will be named the Biles II #stuttgart2019pic.twitter.com/K2HGIVpB0o

Two flips, three twists, and a solid finish! Simone Biles has officially landed her now-viral triple-double at the 2019 World Artistic Gymnastics Championships - Saturday's qualification round, to be exact - which means it will ultimately be named the Biles II. She received a 14.833 for her routine despite stepping out of bounds (that's what all that power will do!). Simone already has one move, the Biles, named after her on floor. It's a double layout with a half twist and is a G-level skill worth seven-tenths of a point. She got recognized for it at the 2013 world championships.

In contrast, the Biles II will be worth a J, or one whole point. Simone debuted this skill while warming up at the GK US Classic in July. She didn't compete it until nationals (aka the US Gymnastics Championships), when she became the first female gymnast to land a triple-double in competition. On the first night, she put her hands down, which counts as a fall, but she landed it on the second night. In short, this move is a triple-twisting double backflip in a tucked position, meaning it's two flips in the air with three twists all before her feet meet the ground. Watch the moment she secures this move as her namesake skill above.

According to the International Gymnastics Federation (FIG), the FIG Women's Artistic Gymnastics Technical Committee will announce which elements have been named for gymnasts and will be added to the FIG Code of Points after worlds come to a close. The skills have to be done successfully and must have at least a C value.

Cheryl Hamilton, an internationally qualified judge and the chair of the Women's National Technical Committee, confirmed to POPSUGAR that at worlds, Simone would submit the skill to the FIG Women's Technical Committee (which she did). Then, they would give it a value (they went with a J, as Cheryl predicted). After that, if she landed it successfully, it'd be named after her (she just did that!). Once officially added to the FIG Code of Points, the Biles II will become Simone's third skill bearing her name. And, in more history-making news, Simone's double-twisting, double somersault beam dismount will also now be named after her - check that out here. Can you keep up? She'll have four moves total in the books!

Related:
The US Women's Worlds Team Has Been Finalized - Here's Who Is Competing For Gold

These are the immune-boosting supplements to take as the seasons change, according to a nutritionist