At age 28, I finally have my “skin-care wardrobe” down pat. Sandwiched in between my cleanser and moisturizer is my trifecta of serums, each of which help to target a different issue: hyaluronic acid twice a day for hydration, vitamin C in the morning in for brightening dark spots, and retinol at night for texture issues. But with the launch of its new Bright Boost Illuminating Serum ($20), Neutrogena just introduced a product that can replace my usual three steps with a single application.

The brand just rolled out its Bright Boost line, which was created by millennial women for millennial women (aka me, aged 28) to target their initial signs of aging—like dullness, dark spots, dryness, and texture issues. The star ingredient is a molecule called NeoGlucosamine, an amino sugar that serves as one of the building blocks in oh-so-hydrating hyaluronic acid. 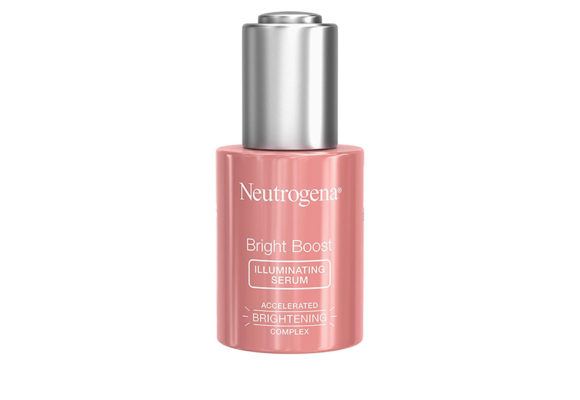 And man oh man, does this thing put in work. When used on its own, it does a lot of the same things that I rely on in my three-ingredient combo. It helps to boost cell turnover—aka retinol’s claim to fame—to 10 times faster than usual, according to Neutrogena; reduces the appearance of dark spots by disrupting the skin pigmentation process, which we usually turn to vitamin C to do; and hydrates and plumps skin, à la hyaluronic acid. While there are no studies comparing the relative effectiveness of NeoGlucosamine to its counterparts, it certainly does give them a run for their money.

As for the serum itself, I just started using it and am already a fan. It has a creamy texture, which is perfect for my dry skin (something else that seems to get worse as I age), and leaves behind a luminous, radiant finish. Plus, it smells like roses. And while it certainly can replace the other serums in your routine, it doesn’t necessarily have to. It mixes just fine with hydroxy acids, so you won’t have to sacrifice your AHA/BHA peel pads in order to add it to your routine. Just be sure not to mix it with retinol, because the combo makes all of the ingredients involved less effective—so as long as you’re alternating days with your serums, you’re good to go. Slathering your skin in the best-of-the-best actives has truly never been so simple. P.S. Wanna know more about retinol? Check out our latest episode of Dear Derm for all of that intel.

Another ingredient you may not know about yet, but should? Polyglutemic acid, which gives hyaluronic acid a serious run for its money as far as hydration goes. And if retinol isn’t for you, try this all-natural version, instead.