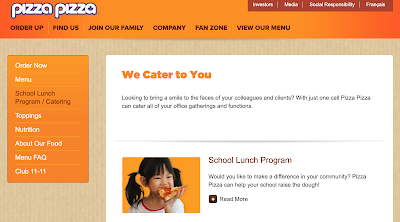 Last week I gave a talk to some parents at my youngest daughter's elementary school.

The talk was about our ridiculous food environment where we are all the proverbial frogs in pots of water that have slowly been heated to a boil, where food, especially junk food, is constantly used to reward, pacify, and entertain our children as well as to fundraise for every cause.

Ironically, the day before the talk I received an email from the school's parent council extolling me to sign my daughter up for weekly pizza days. In it I was told,

"The most valuable fundraiser is Pizza Mondays. $0.50 of every order, every week goes to the [redacted]. It's a win/win/win! One less lunch for you to make, a delicious (and nutritious) slice of pizza for your child and $16.50 to the [redacted]!"

Looking past the wisdom (or lack thereof) of children been taught by their school week in and week out, from Kindergarten to Grade 7, that fast food pizza is a normal, weekly, "nutritious", meal, I couldn't help but wonder just how valuable it really was in terms of fundraising, and so I asked principal.

There are 700 students in the school.

And if Pizza Mondays are the most valuable fundraiser, then perhaps it'd be fair to assume that in total, the school raises $10,000/year in food sale initiatives. That would be $14.30 per kid per year.

Is there really no other way to raise $14.30 per kid than selling them, and normalizing, weekly (or multiple times per week) junk food?

I think there probably is, and here are 3 suggestions each of which by itself might do the job, let alone together (and these are just 3 ideas, there are so many more out there as well).

Fundscrip
Fundscrip is simple to describe. Parents buy gift cards from Fundscrip for stores they already shop at (supermarkets, gas stations, hardware stores, clothing stores, business and school supply stores, toy stores, book stores, electronic stores, restaurants etc.). The gift cards work just like regular gift cards (meaning they work just like cash) and are mailed directly to parents' homes, and the school receives 2-5% (depending on the store) of the value of the gift cards. Given the average family of 4 in Canada's weekly grocery bill runs in at a reported $220, if even only 10% of the school's parents got involved, and if they only used the cards to cover half of their grocery costs, the 3% kickback to the schools would raise $12,000. And that's just by way of groceries!

Grandparents' Day
Many schools run grandparents' days. Simply put they involve inviting all the kids' grandparents to school, putting on some sort of song and dance production, giving the proud grandparents a tour, and either charging them a nominal fee for tickets ($5), or simply soliciting donations during the event (and perhaps annually having a singular cause which then gets branded for that year's grandparents if monies raised). 700 elementary students should conservatively mean at least 1400 grandparents. If only half of them attended, and an average of $5/grandparent was raised, that would bring in $3,500.

School Parents' Goods and Services Auction
With 700 families in our child's school, there are clearly a great many different professions represented among the parents. Creating a night whereby parents can donate goods or services (with a cut to the school) is a great way to both raise money, and raise interest and awareness of the parent body's businesses. Lawyers might donate a discounted will consultations, I could donate work with one of our RDs, or with our personal trainers, artists could donate their art, restauranteurs could donate meals, etc. Done right, and certainly once established as a valuable annual event, there's no reason why this couldn't raise $3,000-$10,000.

The bottom line is that schools truly don't need to sell junk food to children to raise money as there are plenty of other means to do so. Yes, school sold junk food is convenient for parents who aren't keen on making lunches every day, but given we are literally building our children out of what we feed them, and that weekly (daily in some cases) school junk food sales teaches kids, even those who don't order them, that daily junk food is a normal, healthy part of life, taking the time to pack those lunches (or to teach our kids how to pack lunches themselves) is well worth it.

Target the ‘Bermuda Triangle’ of back pain with these 3 stretches

5 foods with vitamin C to help you fight cold season

It Might Not Be Caffeine in Your Coffee That's Making You Poop, According to a Doctor