Don’t have an ingestible beauty routine? Here’s why you might want to start one

No matter how personally accomplished you feel after completing all the steps of your skin-care routine, you might want to hold on your mental high five until you’ve added one last step.

According to John P. Salerno, MD the medical director at Salerno Center NYC, if your serums and moisturizers aren’t lined up next to ingestible supplements in your medicine cabinet, you could be missing out. Translation: Your topical efforts might not be as effective as they could be if you aren’t supporting them at the source of your skin’s woes, says Dr. Salerno—AKA, in your cells.

“Ingestible beauty can help increase collagen protection as well as help limit free radicals, supporting our skin at the cellular level, from the inside out,” Dr. Salerno explains. “Thus, it has the potential to be more powerful than a topical option.”

“[Ingestible beauty] has the potential to be more powerful than a topical option.”

The ingredient he cites for cellular support is CoQ10, an antioxidant found in supplements like MitoQ that helps your body create cellular energy and neutralize free radicals, according to Dr. Salerno. And since free radicals are basically the arch nemesis of skin-care lovers everywhere, CoQ10 could help you work toward a generally glowier complexion.

“Internally, free radicals caused by environmental factors [such as UV radiation and pollution] can cause damage to the skin if not managed by the body’s own supply of antioxidants, including CoQ10,” Dr. Salerno says. “This can lead to sagging skin, wrinkles, fine lines, and uneven pigmentation.”

The short version of the story: Just think about how much more you’ll feel like the epitome of skin-care goals when you know you’re supporting your complexion from the inside.

Keep reading to learn more about the reported CoQ10 benefits for skin care that’ll amp up your ingestible beauty routine.

Remember in science class when you learned that the mitochondria are the powerhouse of every cell? That’s the same idea behind MitoQ. To review: “Mitochondria generate the energy needed by cells to function properly and fight off free radicals,” says Dr. Salerno. Thus, the scientists who developed MitoQ wanted to find a way to get free-radical-fighting antioxidants inside the mitochondria.

During their research in the 1990s, they discovered that most CoQ10 supplements were too big to effectively pass through the mitochondria wall, rendering them ineffective. This discovery led them to creating a smaller form of CoQ10 meant to enter the cell more easily: mitoquinol, the hero ingredient in MitoQ.

“This results in a greater amount of CoQ10 accumulating inside the mitochondria, helping to support energy levels and neutralize free radicals more effectively than regular CoQ10 supplements,” says Dr. Salerno. And since no other part of the body uses CoQ10 besides the mitochondria, Dr. Salerno says, it makes sense that you’d want your supplement to be able to get there if it’s actually going to work.

Why other buzzy youth-boosting ingredients might not be enough

Already on the ingestible beauty train? (Looking at you, collagen lattes.) That’s great, but it also might not be working quite as well as you think it is, according to Dr. Salerno.

“Ceremides, collagen, and hyaluronic acids are all extremely important ingredients to help support healthy, nourished skin,” Dr. Salerno says. “However, they do not treat one of the root causes of accelerated skin aging, which is mitochondrial degeneration.”

As we age, natural CoQ10 production in the mitochondria declines, Dr. Salerno explains, which effects skin cell energy and shows up as aging on the skin. “There is evidence to support the idea that mitochondrial degeneration and subsequent oxidative stress may contribute to the development of skin aging in a significant way,” he says. “MitoQ is able to help mitochondria function optimally, thereby, supporting overall skin health.”

But don’t worry—MitoQ has you covered on the ceramides, collagen, and hyaluronic acid fronts too, all of which are added to its skin-care formulas to help promote firmer, more moisturized skin. 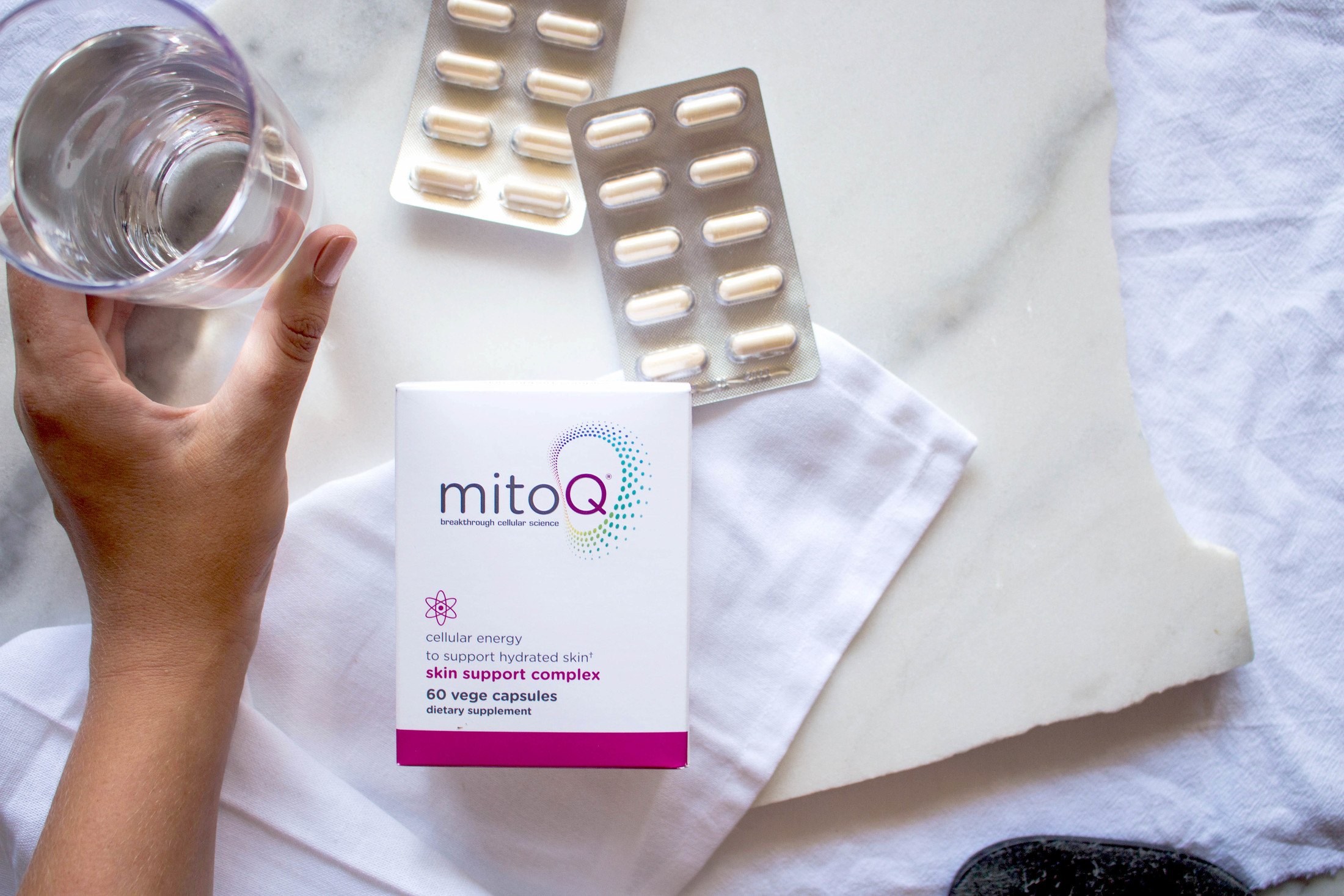 3 Easy Breathing Techniques to Help You Calm Down Right Now